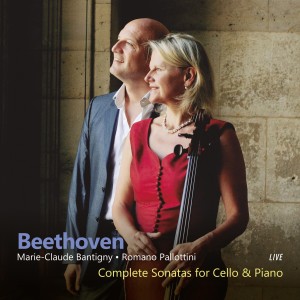 Beethoven’s Sonatas for cello and piano span his entire creative life. The two Opus 5 works were composed in 1796 and dedicated to King Frederick William II of Prussia. Beethoven, a virtuoso pianist, incorporated many of the techniques of Jean-Louis Duport, one of Frederick II’s court cellists and one of the most revered musicians of his era.
The Third Sonata Opus 69 dates from the composer’s “Middle Period”, and is contemporary with the 4th and 5th Symphonies and the Razumovsky String Quartets. Dedicated to Baron Ignaz von Gleichenstein, its premiere was probably given by the cellist Joseph Linke, accompanied by Carl Czerny at the piano. The score displays brilliant thematic inventiveness in a tender, lyrical vein which reveals the proximity of the Pathétique Sonata.
The two Opus 102 Sonatas were composed at the beginning of Beethoven’s visionary “Late Period”, during 1815 and 1816. They were dedicated to the Countess Marie von Erdődy. These are mature works which open the doorway to Romanticism, both in their formal freedom and in their rhythmic and melodic audacity.