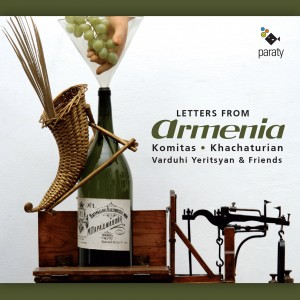 A composer’s mother tongue is the first music he hears; it therefore determines the “genetic inheritance” of the musician’s sound world.  The link between a country’s music and its language seems, therefore, evident to me.  There is a clear relationship between the lyricism of Verdi’s music and the melodious character of Italian.  And does the acute sense of structure inherent to the Austro-German music of Beethoven, or Schoenberg, not reflect the language spoken by these two composers?  It is just as incontestable that Debussy’s chiaroscurist art is fundamentally linked to the ever-nuanced, veiled nature of the French language.

Armenian music is no exception to this rule.  It is as singular a construct as is Armenian, an orphaned Indo-European language born at the borders of Orient and Occident.  Like the national language, it is a synthesising language that unites opposing sources, Eastern and Western, folk and art.  If the melodic and even harmonic archetypes of Armenian music give a leading role to the augmented intervals and untempered scales characteristic of the Orient, the great Armenian musicians’ compositional art is thoroughly anchored in Occidental technique and know-how.

The founding father of Armenian art music was Komitas Vardapet.  Like Bartók, he was a great collector of folk melodies, which he first faithfully transcribed as he heard them, then arranged, harmonised and complexified them.  The folk song arrangements played on this recording, either by a solo piano or by small chamber groups, are therefore already at one step’s distance from the original folk model, which would be sung a cappella.  Several decades later, the other great figure of Armenian music, Aram Khachaturian, would use these folk-derived elements and add to them that great orchestral mastery so characteristic of many Soviet-trained composers.

Most of the folk songs set down by Komitas have touchingly simple texts that express nostalgia, or even melancholy.  Though humour and derision are important elements of Armenian culture, the ordeals the Armenian people have endured over the course of their lengthy history ensure that the expression of grief is a constant feature.

This recording is released in the centenary year of the 1915 genocide.  As this tragedy has never been recognised by those who perpetrated it, the Armenian people has never been able to engage in the necessary collective grieving process that must follow such a calamity.  On the contrary, the wait for an admission of responsibility from Armenia’s neighbor does nothing but revive national anger against an unacceptable case of historical revisionism.  But even in the darkest moments of its history, Armenia has always produced musicians and music.  The Armenians’ legendary optimism is an effective form of struggle against obscurantism.

The pieces in this recital may be animated, contemplative, tender, or solemn, but they are very rarely gloomy or woeful.  A sort of trust in the future characterises the “Armenian spirit”.  Music is synonymous with hope, it is a way of fighting against annihilation, a tool of resistance. As I contemplate my ancestors who vanished a century ago, I would like this recording to bear witness to the faith in justice that has never fled my native land.