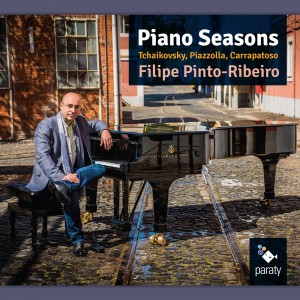 This recording results, therefore, from multiple experiences and motivations. It forms a musical triptych where I compel a dialogue between Tchaikovsky’s romanticism, Piazzolla’s tango and Carrapatoso’s Lusitanian flavour: three cycles of ‘seasons’, three countries, three languages and visions of the world from composers who have tackled the theme of the seasons in three different centuries, the 19th, the 20th and the 21st.

Tchaikovsky’s The Seasons, Opus 37b, holds a very special place in the great Russian composer’s heritage, and it rapidly became his most popular work for solo piano. They take the form of 12 pieces, or ‘musical frameworks’, matching the twelve months of the year, reflecting Russian scenes from the second half of the 19th century. They were commissioned in 1875, when Tchaikovsky was teaching at the Moscow Conservatory, by Nikolay Matveyevich Bernard, who also wrote the subtitles and epigraphs that accompany each piece, publishing the whole over the course of the year 1876 in his monthly St. Petersburg publication Nouvellist.

Tchaikovsky offers a rather personal interpretation of the theme of the year’s seasons. According to him, the continuity of life in general, and of human existence in particular, is symbolised by the family and the home, where life continually hovers.

The cycle begins with a scene inside the house, in winter – January, At the Fireside – a lyrical idyll of family comfort.  February brings us a lively and exuberant scene of the Russian Carnival, the Maslenitsa, which will also inspire Stravinsky’s Petrushka. In March we listen to the beautifully ornamented melody of The Lark’s Song.  April’s piece, Snowdrop, is an intimately and ingenuously lyrical dialogue between two voices. May evokes the beauty and excitement of St. Petersburg’s White Nights. June’s Barcarolle, one of the cycle’s most popular pieces, is a deeply-felt elegy with a more rhythmically animated central section. In July we have the Reaper’s Song, an ‘outdoor’ piece of great vivacity and varied colours. In August’s Scherzo (Harvest), we begin to sense the anxiety of gathering in the rye before the September rains begin, followed by a less readily imagistic intermediary passage, perhaps representing the harvesters’ rest during the noontime heat. September brings us The Hunt, with its great sonorous dynamism evoking horns and galloping horses. The Autumn Song, for October, is one of the cycle’s most contrapuntal pieces, beginning with a melancholic melody that transforms into an inspired love duet. Rachmaninov loved playing November’s Troika (a sled pulled by three horses), which is both one of the most popular and one of the richest and most attractive pieces in the cycle. Finally, for December, Tchaikovsky chooses a family festivity celebrating the Nativity, Christmas, and composes a waltz, his favourite dance, which elegantly and vivaciously brings the cycle to an end.

The Four Seasons of Buenos Aires have become an emblematic example of what is known as the ‘new tango’.  Originally composed by Piazzolla for his quintet of bandoneon, violin, piano, electric guitar and double-bass, they were not conceived as a suite. Summer is a tango written in 1965 for the play Golden Hair, Autumn dates from 1969 and the other two seasons were written in 1970.

Marcelo Nisinman, who in his youth earned Piazzolla’s praise and encouragement, made a new, highly virtuosic piano arrangement of these pieces in 2013, which are recorded for the first time here.

In Buenos Aires, there are no great contrasts between the seasons, as there are in Tchaikovsky’s cycle. The ‘weather’, or, rather, the ambience remains constant, characterised by a dense, sensually-charged atmosphere. There are, however, great contrasts and temperamental variations in each of Buenos Aires’s seasons. Powerful rhythmic pulsations, improvised cadences, contrapuntal passages and complex harmonies combine to produce sadness, sensuality, isolation, tenderness and passion – the tango’s essential, intrinsic elements.

Eurico Carrapatoso composed his Four Last Seasons of Lisbon over the course of the four seasons of the year, between June 2013 and June 2014.  The natural and historical charm of the Portuguese capital forms the primary inspiration for the composition: his Winter glows like a moonlight on the Tagus, in January; Spring, a melancholy waltz from the Carnation Revolution; Summer, whose march calls to mind the Night of St. Anthony, Lisbon’s patron saint; and Autumn, a fado from the Tagides, the Tagus’ water nymphs. Carrapatoso also notes the inspiration of Richard Strauss’s Four Last Songs, as evidenced by his choice of title. But the most remarkable feature of the cycle is how its bare and poetic language reaches the very essence of each of Lisbon’s seasons.

The poem appended as epigraph to this text was written in the 13th century by the Zen Buddhist master Eihei Dōgen. With the readily apparent yet expressive simplicity with which he sings the beauty of the seasons, Dōgen connects us to the essence and the beauty of nature’s elements, such as snow, the moon and flowers, and awakens in us a sense of expressive communion such as I find in the music of Tchaikovsky, Piazzolla-Nisinman and Carrapatoso as well. Dōgen gave his poem on the seasons the title Innate Spirit – a spirit of contemplation and of sharing that inspired this recording.