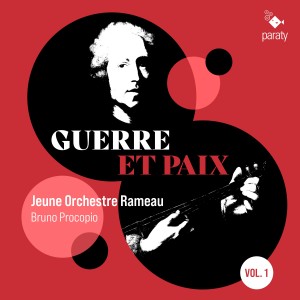 Conducted by Bruno Procopio, founding conductor of the JOR, Jeune Orchestre Rameau, which he founded in October 2021, the conductor and instrumentalists play the music of the genius who wrote Hippolyte and Aricie, Les Boréades and Platée. With the help of the musicologist Sylvie Buissou, they are now offering the new programme “Guerre & Paix”, a vast purely orchestral fresco which reminds us, through the intelligence of the colours, the festival of timbres, the expressive architecture, the science behind the naturalness, how much Rameau was the inventor of the French orchestra in the age of Enlightenment. By bringing together more than 50 instrumentalists, the maestro also reveals the sound and proportions as well as the right balance as the author of Dardanus, Castor and Pollux or the Sybarites knew them in his time: playing Rameau is now a challenge.

“Rameau wished to crystallise the essence to render in music what would be for him the quintessence of the elements, be they natural or human.”

A very nice review of the Jeune Orchestre Rameau’s debut album, Guerre et Paix in Scherzo magazine:
“It is rare to witness such a musical event …. if they stay the course: the JOR could become one of the best period instrument orchestras in the world ….”