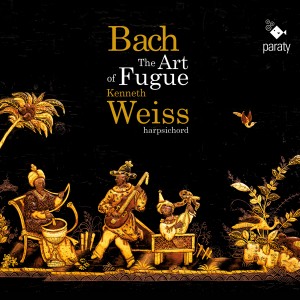 Composed during the last decade of his life, the Art of Fugue consists of 14 Fugues (or Contrapunctus)
and 4 Canons based on a single subject. It was Bach’s final and most accomplished exploration of
contrapuntal composition. Although already viewed by his contemporaries as a master of the fugue,
Bach sought to push the limits of his mastery by employing a unique subject, in D minor, to create his
contrapuntal apotheosis. Each fugue increases in complexity and the original subject undergoes numerous transformations attempting to demonstrate all the possibilities of fugal composition – thematic inversion, rhythmic alteration, entire mirror images, a variety of national styles, augmentation and diminution. New themes are introduced in the second half of the work, yet they all derive from the original subject.

The final fugue that Bach ever wrote and the one that ends the Art of Fugue, Contrapunctus XIV, is
incomplete. The third subject he introduces in this fugue is his own name B-A-C-H. The letters correspond to B flat, A, C and B natural (which is H in German). Just as a painter signs their masterpiece, this is Bach’s musical signature. Although Bach’s failing health has been given as the reason why it is unfinished, some leading Bach scholars now think that the end of the work was either lost or was never meant to be completed, Bach perhaps intending it to be a challenge for the player to solve. Yet there is a powerful metaphor in this compelling moment of rupture, after 80 minutes of an unparalleled achievement of divine complexity and beauty. Abruptly, it is over. Bach’s final work, like life, ends without resolution.

Bach notated the piece on four staves rather than on the usual two he employed for his keyboard works.
He does not specifically state that the work is intended for keyboard (although this is stated by his son C. P. E. Bach who first published the work a year after Bach’s death). There was a strong, centuries-old tradition of writing keyboard counterpoint in full score for purposes of visual clarity, however, many scholars believe the piece was intended to leave open the option of scoring. Although I follow my teacher Gustav Leonhardt in believing it is a keyboard work, Bach’s works in general, more so than those of any other composer, can almost always be successfully transcribed because of their inherent completeness and universality. A string quartet, modern piano or any other combination of solo instruments can successfully and convincingly do justice to the work.

All instruments possess their own unique qualities, and the manner in which they can accentuate the
intricacies of part writing differ. Whereas a pianist or violinist can simply play a theme in a given voice louder in order to highlight it, the harpsichord, unable to do this, uses articulation, touch, tempo and rhythmic variation to create a dimensional depth. Although more difficult to achieve, this “magnificent constraint”, the deployment of these techniques to explore expressivity and nuance, is everything.
Kenneth Weiss, Montauk, New York, June 2021

Watch the interview with Kenneth Weiss on Classiquenews Classiquenews about his latest album The Art of Fugue by Bach available here 👇
https://lnk.to/Bach_Art_of_Fugue_Kenneth_Weiss

“Each piece gives the impression of a specific painting and Kenneth Weiss’ talent makes one feel passionate from start to finish. The Tasken harpsichord sounds magnificent in a crystal clear recording. A magnificent recording.