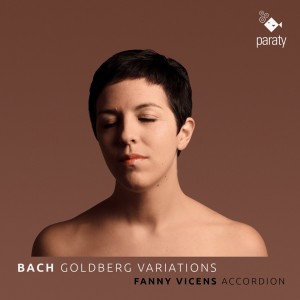 In this day and age it’s rare that a novel approach can refresh our way of listening to a famous work. When this does happen, it’s almost always due to a backwards glance : period instruments, historic temperaments, rediscovered musical treatises…Fanny Vicens has gone in the opposite direction.

She makes so bold as to play the Goldberg Variations on an instrument that dates from more than a century after the work itself was written. Her rendition is not an adaptation, however, but a transfer, a transliteration that is entirely faithful to the text. Vicens stands on a path that looks in two directions, each the mirror image of the other : the work acts to reveal the instrument, and the nature of the instrument reflects the intentions of the composer, who explicitly states that his score is intended for a double-manual harpsichord. Bach’s specification was linked to the work’s frequent superimpositions and hand crossings, and a performance on the accordion, with its stereophonic keyboards, provides a demonstration of the spatialized sound reality inherent in Bach’s contrapuntal writing.

Fanny Vicens’ album Bach Goldberg Variations is ResMusica.com’s Key of the Month.
“[…] she is now recording in the full maturity of her art, with an unequalled intelligence of the text and mastery of her instrument.”