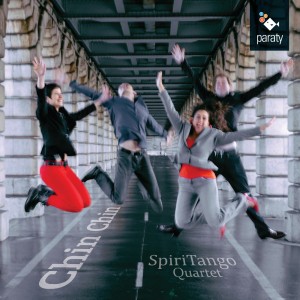 This album is also the occasion to celebrate the fourth anniversary of the group SpiriTango, whose energy is most evident in the track Chin Chin by Piazzolla.

Chin Chin : This frenzied work introduces firstly the accordion, a drumming double bass and a screeching violin. Then it really gets underway with a long piano glissando. The romantic accordion solo that follows is joined by the violin, then the double bass and the piano bring fullness, depth and warmth to this duo. The frenzied rhythms reappear, the pace of the piano picks up before giving way to great parallel orchestral harmonies that transform into a polytonal upsurge, which itself comes to a climax in a terrifying dissonance, completed with a final flourish. For her pace, the pianist, Fanny Azzuro, takes her inspiration from Pablo Ziegler, a jazz pianist who worked with Piazzola from 1978.

Concierto para Quinteto : This could almost be called a concerto grosso because nearly all the instruments have their own solo parts. Thomas Chedal has rewritten his, Fanny Gallois does not exactly play the work as it is written and Fanny Azzuro, for her last solo, was inspired by the part written for the guitar. Taking so many liberties expresses, as always, the living spirit of tango.

Escualo : Sébastien Surel was the main inspiration for Fanny Gallois’s initial cadence, which reveals the violin in another light, first played in pizzicati and then used like a ukulele or a banjo. At that point, extremely syncopated, dry, biting, repetitive and violent music is set into motion. Is it the escualo (shark) waking up?

Kicho : This was written by Piazzolla in honour of his double bass player, Kicho Díaz, who joined the quintet in 1960. But, here again, the initial cadence, introduced by the enigmatic call of the piano and the accordion, has been rewritten by Benoît Levesque. Starting with pizzicati then arco, the double bass evolves towards a certain lyricism. The drumming on the instrument acts as a signal announcing the ‘motorism’ which follows. During this part, the quartet showcases several lyrically-written solos, notably a very moving violin and double bass duet where the instruments combine and the double bass, using the upper register, sounds just like a cello.

Tangata : This piece abounds in musical concepts and is also notable for the way they are put together. The SpiriTango Quartet has therefore ‘only’ added a few elements (ornaments, glissandi, noises…) because almost everything is written out, even the piano improvisation. The initial accordion solo, monodic and nostalgic, steadily accompanied by the double bass in pizzicati, is punctuated by the painful screeching of the violin which turns into a lyrical descant. The double bass is played on its own in pizzicati, then the romantic piano solo fills the soundscape before a stormy section. Progressively, after the desperate cry of the violin, the double bass/violin duo is softly accompanied by the piano before evolving towards an emotional release.

Libertango : Based on a harmonic ostinato, this music seems brisk and agitated, and calls on different effects (such as the use of chicharra —cicada—, percussion, glissandi). It forms a kind of diabolical machine from which the theme emerges.This version of Libertango partly strengthened the identity of the SpiriTango Quartet, since the arrangement has a particularly powerful role here. They have made the introduction and the ending their own, adding a particularly groovy percussion break that emerged during a rehearsal.