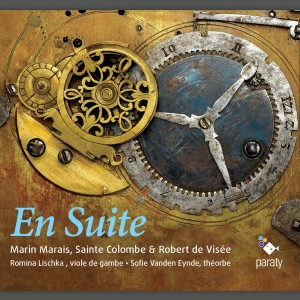 The viola da gamba and the theorbo are string nobility: an artistic duo embodying the height of grandeur and sophistication. Indeed, the sense of intimacy that can arise between the two in French baroque repertoire provided the impetus for this recording.

The lute and the viola da gamba shared quite many common features, and it is therefore no great surprise that many of the professional musicians at the French court performed on both instruments. One of these was Robert de Visée (c. 1655-1733), who was employed alongside Marin Marais as Musicien de la Chambre du Roi, meaning that both men must have played together countless times. De Visée was not only a theorbo and viola da gamba player, but also a guitarist and composer. He had a special gift for arranging his own compositions: his 189 original works spawned at least 730 different arrangements circulating for seven different instruments or instrumentations.

Apart from their place of employment, Marais and de Visée also shared an unwavering loyalty to the absolutist aesthetics of Louis XIV, their employer. That commitment can be heard especially clearly in their faithfulness to dance as the model for instrumental music in the face of the advances made by the Italian sonata, with the violin leading the charge.

Dancing had occupied a central role in the social rituals of the French aristocracy since the mid-16th century. Being able to dance was consequently a basic requirement for anyone hoping to climb the social or political ladder. Under the reign of Louis XIV, lavish dance extravaganzas such as the ballet de cour steadily became less of a social pastime and more of an expression of his absolute monarchy. Dance was as it were the stage on which the Sun King’s power was visibly enacted.

The intimate instrumental music composed for La Musique de la Chambre du Roi by Marais and de Visée, among others, was not generally suitable for dancing. It was intended in the first place as music to be listened to, which gave the composers freer reign than they would have enjoyed in purely functional dance music. All the same, however, their compositions continued to be shaped by the characteristic dance rhythms and idioms which were all around them.

Instrumental dances were generally grouped in suites which followed the fixed basic order of allemande, courante, sarabande and gigue, preceded by an abstract and often fairly lengthy prélude. Chaconnes or rondeaus could be added on if desired; their repetitive structure gave players the opportunity to make a more extensive display of their instrumental prowess. All the dances in Marais’ Pièces de viole are arranged by key, as if they were a catalogue from which musicians could assemble their own chosen combination of pieces.

The vast scale of Marais’ collection also reveals how the set dances were increasingly accompanied by character pieces. In Allemande La Magnifique, for example, extrovert expressiveness obviously gained the upper hand over the original dance rhythm. Purely character pieces such as La Rêveuse, Le Badinage and Les Voix Humaines take a more daring step away from familiar dance conventions. It is not the dance’s time signature but external sources of inspiration which determine the sound of these compositions, ranging from otherworldly contemplations expressed in hushed tones to a knowing curl of the lip to the secret of the human voice. Perhaps it is in this last guise that the viola da gamba reveals its most beguiling facet, for many musicians of the time considered the viola and the human voice to be both equally capable of song.

Fans of Collegium Vocale Gent will know Romina Lischka takes your breath away. Her viola da gamba solos in the St. John and St. Matthew Passions unite audiences in rapt silence, and those of us who heard her last year with the Hathor Consort were invariably spellbound. Now she strikes again, this time in a musical partnership with lutenist Sofie Vanden Eynde. The skill and dedication on display here are frankly astonishing. Marin Marais’ viol music is transformed: in Lischka’s hands, his character studies are not just highly wrought; they are utterly profound. Vanden Eynde shines in the solo suite by de Visée, her attention to detail coming through in the colour of each theorbo stroke. Even more impressive, however, is the interaction between the two performers, who seem almost to breathe as one. An absolute gem of a CD which deserves to be widely admired.