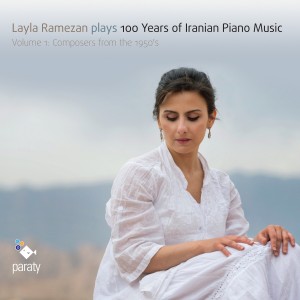 This is the story of Iran. Or – at least – a partial musical history, hidden within the pages and currents of time. This collection reflects on secret nooks and crannies, which arose from another time, another place. The composers, born between 1928 and 1958, grew up in a completely different world. They have been gathered together, so that the listener can hear an expression of a time and context that seems exceedingly far away. Notwithstanding, it is necessary to undo this oversight, and to extract the music from the middle of a pile of dust, like a buried treasure; to hear the result of all this learning and direct our attention to what the past may have been.
When we consider urban Iranian music of the 20th century, the piano is unquestionably one of the most culturally influential actors and symbols. The piano first appeared in Iran as a gift from Napoleon Bonaparte, to the court of King Fath’Ali Shah (Qajar dynasty, 1797–1834). It was then progressively incorporated by the master court musicians of Nassereddin Shah (Qajar, 1848–1896); the process took a mere 50 years