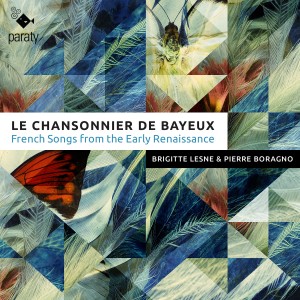 The pieces belong to all kinds of genres: love songs (sometimes courtly, more often bawdy), drinking songs, satires, women’s songs, others dealing with events and characters from the Hundred Years’ War (Le Roy engloys and Hellas Ollivier Vasselin). Only pious songs are not featured: even the incipit Belle tres doulce mere Dieu surreptitiously leads to rather lewd verse. A poetical and musical contrast can be at the very heart of some songs (J’ai veu la beaulté m’amye). Some of the themes have floated through the centuries; thus the dialogue of a father and his rebellious daughter in La belle se siet, already set to music at the time of Guillaume Dufaÿ, will turn into our children’s song Ne pleure pas Jeannette,sung to an altogether different melody. The upper classes of the late XVth century would appreciate the many sexual innuendoes and the ‘popular’ situations referring to unhappily married women cuckolding their husbands, drunks, soldiers complaining that they have not been paid, and even a menagerie of noisy animals (a donkey in My my). No doubt the audience hugely enjoyed these stagings of country life, real or fictitious, as they did in the XIIIth century when listening to some motets and pastoral songs of trouvères.