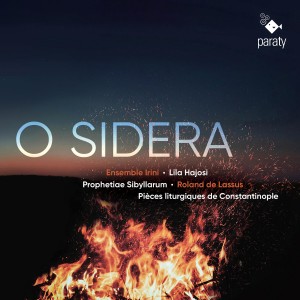 Twelve Sibyls, ancient psychics, became during the Middle-Ages the counterpoints of the Prophets, announcing since the beginning of time (2nd-7th centuries) the arrival of a child who will become the Savior of the World. The emergence of those characters and of these strange and mysterious texts resulted of the fascination the Renaissance resolutely showed towards Antiquity. The Sibyls were even portrayed by Michelangelo on the ceiling of the Sistine Chapel. And it is perhaps while he was in Rome as Chapel Master of St John in the Lateran that Roland de Lassus met them and drew from their figures -with names already so dreamlike and evocative of marvelous lands such as Sibylla Delphica, Persica, Erythrea, Cumana, Hellespontiaca, Libyca … – the inspiration for this collection. The Prophetiae were composed somewhere between Rome, Antwerp and Munich, within a short period of disappearance (1554-1555) of Lassus, during which no one knows with certainty what became of the composer.

From the litanic undulations of the Cheruvikon preparing the Communion and turning the assembly of the faithful into the living images of the choir of the six-winged angels, to the words of Gabriel in the Acathist, carrying the embryo of life which will change the face of the World, to the hypnotic trance of the flamboyant Polyeleos, Byzantine music tells the tale of the orthodox conception of the Mystery. The figure of the “unseizable” God shows an immense humility in devotion, comprehending the mystery beyond humanity’s reach, rejecting the temptation of simplification and explanation, and therefore the grave temptation of anthropomorphizing of the divine. The strength of orthodox faith translates into an acceptance, a welcoming of the inconceivable, of what necessarily escapes Mankind, thus acknowledging human life as simple creatures on the surface of the world. The liturgy is sung, never spoken, lectured.