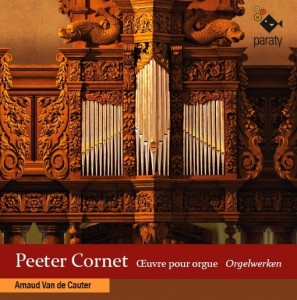 Peeter Cornet was organist of the chapel of Archdukes Albert and Isabella at the Spanish court of Brussels from the beginning of the 17th century until his death in 1633 (he is buried at the Notre-Dame du Sablon church, in Brussels). Many details of his biography remain unknown, in particular his birthdate, which is estimated around 1575.

Cornet’s organist colleagues at the court of Brussels were Peter Philips, John Bull, Juan Zacarias and Vizencio Guami. The maître de chapelle was Gery de Ghersem and the court organ builder was Matthijs Langhedul, both of whom spent many of their formative years in Spain. Peter Paul Rubens was also in the service of Albert and Isabella at the time, not only as a painter, but frequently as the archdukes’ ambassador to foreign courts. Cornet’s main colleague was Peter Philips (1560/1561 – 1628), who had fled England for religious reasons, and with whom he had very close ties (Philips was the godfather of Cornet’s third daughter, Angela Maria, born in 1614). Tradition has it that Philips was the archduke’s organist while Cornet was at the personal service of Archduchess Isabella.

Multiple influences can be found in the works of Cornet, thereby attesting to the very real role Brussels had as European capital even at the time. The Toccata noni Toni (Nielles-les-Ardres, track n°1) and one of the Fantasia Ottavit toni (Nielles-les-Ardres, track n°3) are in direct relation with Italian music, while another Fantasia of Ms Christ Church 89 (Nielles-les-Ardres, track n°16) is a true Tiento de medio de registro de baxon, whose kinship to the work of Sebastian Aguilera de Heredia is obvious. The long Fantaisies, contemporary to the pieces of Jan Pieterszoon Sweelinck, follow a specific canon. They are polythematic; not only does the composer build successive sequences on various motifs, but he also introduces a sort of “counter-subject” which isn’t treated overly strictly as a counterpart to the principal subject, but rather takes its independence and becomes a subject in its own right.