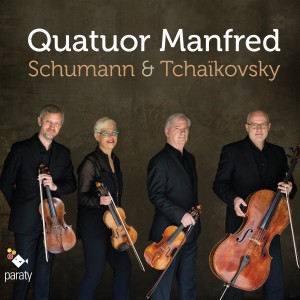 For the 30th anniversary of our string quartet, we decided to evoke our patronymic gure – Manfred – through this recording.
Manfred, an essential representative of European romanticism, is inseparable from his creator, George Gordon Baron, known as Lord Byron (1788-1824). Manfred is Byron’s verse drama, published in 1817, introducing a traveller contemplating a sea of clouds, immortalized in a painting by Caspar David Friedrich the following year.
A kind of modern Prometheus, the character of Manfred immediately enchanted the visual art world. But contrary to Faust – whose musical legacy is abundant – few composers have dared to tackle Manfred, who embodies man’s revolt against life and who communicates with the invisible world.
Two composers have used Byron’s text prominently: Schumann in his dramatic poem Manfred opus 115, undertaken in 1848 and premiered in 1852, for narrator, speaking soloists, chorus and orchestra. And Tchaikovsky with his Manfred Symphony opus 58, composed in 1885, and premiered in 1886.
Via the character of Manfred, Byron ponders the question: “Why so much beauty?”
Schumann and Tchaikovsky were nourished and inspired by this text. By choosing the moniker Manfred, we a rm our commitment to a sincere approach to musical art, eschewing compromise. We hope this recording of quartet music by these incomparable composers will feed your imagination and passion in turn.

The members of the Manfred Quartet