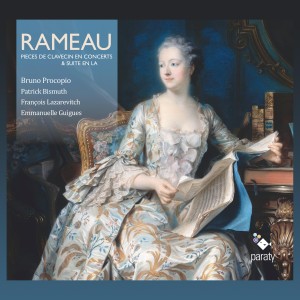 The Pièces de clavecin en concerts are a kind of link between the Italian trio sonatas and Bach’s polyphonic trios. An example of the latter would be the trio sonata which concludes the Musical Offering. Another example would be the keyboard sonatas – for harpsichord or pianoforte – with violin or ad libitum accompaniment which were developed considerably at the end of the XVIII century, especially in France. In this compositional style the keyboard has the lion’s share of the music, whereas the string instrument simply doubles the melody or punctuates the bass line. Invigorated by his experience in the theatre, Rameau frees himself from the framework forged by his Italians and French predecessors, and elaborates and expands the trio form. Each “Concert” has an almost symphonic aspect, where the harpsichord is free of its conventional polyphonic function. Instead, it becomes a solo instrument in its own right alongside two partners which add luminous, complementary sounds.
Each concert consists of three or four pieces: character pieces, genre pieces, or poetic pieces. Almost all of the movements are named according to the tradition of French harpsichordists. With the exception of the Deuxième Concert’s minuets and the Troisième Concert’s tambourines, each individual movement has a descriptive title, evoking a character, a place, or a memory.
After many rewarding performances over the past 15 years, Bruno Procopio decided to record these master-works by Rameau. This disc, featuring the Pièces de clavecin en concerts and the Suite in A, is the result of a long collaboration between the young French Baroque soloists.

“At the heart of this most cheering of programmes, well-timed for the upcoming Rameau Year of 2014, is Bruno Procopio’s harpsichord. The former student of Rousset and  Hantaï confirms his immense talent, his interpretative intelligence, a flamboyant refinement that illuminates the genius of a Rameau touched by the hand of grace.”

“The reproduction of a Rückers sounds marvelous here under the agile and inspired fingers of the instrumentalist. […] The heterogeneous aspect of the pieces is  very well captured. This recording brings about a sense of well-being thanks to  its invigorating and sensitive music and playing. To be listened to again and again.”

“Remember this name: Bruno Procopio is one to follow closely, for his exemplary  path and especially for his intelligence, his maturity.”