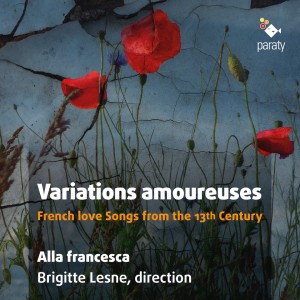 The variant, and its corollary the variation, inseparable from the Middle Ages, have established themselves, particularly since Eloge de la variante (In praise of the variant) by Bernard Cerquiglini and the term of “mouvance” (mobility) inaugurated by Paul Zumthor, as genuine writing processes. Extending them to the musical field sounds quite obvious, and allows us furthermore to apprehend the modes of transmission and circulation of the medieval melodic repertoires. These Love variations thus bring into play the sometimes substantial differences which exist between compositions that tread across the borders of genres and styles. As evidence of this lively interpenetration of genres, certain secular monodies sometimes crop up as fragments of conducti, polyphonic songs whose etymology testifies to their original destination: to accompany processions.