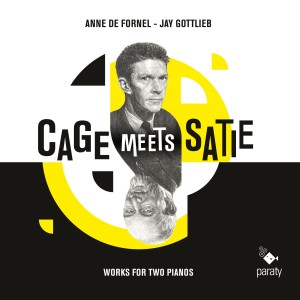 Cage Meets Satie
If there is one composer that John Cage admired throughout his career, it is Erik Satie. He was instrumental in promoting the music of the French composer in the United States. The first event he organized took place during the summer session of Black Mountain College (North Carolina) in 1948: twenty‐five concerts were dedicated to Satie’s music. Places varied: he sometimes chose the grand piano in the dining room and on other occasions, the upright piano in his bungalow whose open windows allowed the public sitting on the grass to listen to the music. The highlight of this festival was the performance on August 14, 1948 of the lyric comedy Le Piège de Méduse (1913). The composer often preceded the concerts with a short lecture, one of the most significant entitled “Defense of Satie”.
During his stay in Paris in 1949, Cage continued his research on Satie’s music by studying his manuscripts, some of which Darius Milhaud had deposited at the Paris Conservatory in 1939. He was delighted to attend a private concert with Suzanne Tézenas during which the Swiss tenor Hugues Cuénod sang Socrate and likewise to meet Jean Mollet who knew the French composer. In the capital, he also visited Henri Sauguet in June 1949, who offered him two manuscripts of furniture music for small ensembles; it was in this context that he discovered the manuscript of Vexations for solo piano (1892‐1893). To his great regret, having promised it to critic Claude Rostand, Sauguet could not give it to him.
However, Cage was allowed to take a picture of it which he published in Contrepoints n° 6 in 1949. In September 1963, he organized the first performance of this work at the Pocket Theatre in New York. For eighteen hours and forty minutes, ten pianists (including the composer) took turns playing every twenty minutes, with no interruption.
Throughout his life, Cage remained faithful to him, expressing his attachment in these terms: “Perhaps I can be blamed for my devotion to Satie. But I can never give it up… If my ideas get confused, I owe this confusion to love”.