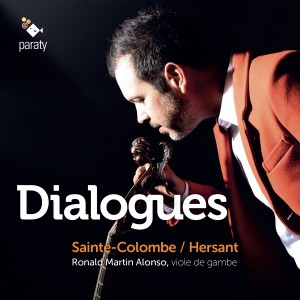 The solo pieces by Monsieur de Sainte-Colombe presented here were written around 1690 and are part of a manuscript included in the archives of the municipal library in Tournus, Burgundy. Hence its name: the ‘Tournus Manuscript’. The first modern edition of the manuscript was published in 2013 by Edition Güntersberg, prepared by Herausgegeben von Günter and Leonore von Zadow. Until then, only a facsimile edition by Minkoff had been published, one which is long since out of print. I came across the pieces quite by accident while searching through the music shops that populate the Rue de Rome in Paris. I was straight away fascinated by the richness and wildness of the writing which struck me as more akin to improvisations rich with fantasy. The freedom of the writing leaves ample liberty to the performer to construct the rhetoric and development of each phrase, to decide on the appropriate rhythmic proportions for each dance, to choose the tempo at which the notes should be played and to consider which moments to accentuate and stress. Today, a few composers take inspiration from Sainte-Colombe’s heritage to give new life to the viola da gamba. The French composer Philippe Hersant, born in Rome in 1948, has written a number of pieces for solo viola da gamba, including ‘Le chemin de Jérusalem’ (The Road to Jerusalem – 2003), as well as using the viola da gamba as a solo instrument with vocal ensemble in Psalm 130, Aus Tiefer Not (1994), Stabat Mater (2002), Falling Star (2005), Clair Obscur (Light-Dark 2008) or in combination with other baroque instruments (lutes, theorbo, cornett, baroque violins), such as the Cantique des trois enfants dans la fournaise (Song of the Three Children in the Furnace, 2014) for which he was consecrated composer of the year for the third time in the annual French classical music awards in 2016. In this recording I have chosen to pair two composers, both of whose work is of profound importance to me, in a dialogue that transports us into their respective fantasy universes. They cohabit, influence and exchange with each other in such a way that the notion of time disappears entirely. This selection invites us into a journey where music dialogues wordlessly and where the sound of the viole and the emotions it elicits combine to narrate a story, to awaken intense emotions and send us from one extreme of emotion to another, from profound sadness to ecstatic joy. The viola da gamba: an instrument that has come back to life and which like a mirror reflects the past into the present.