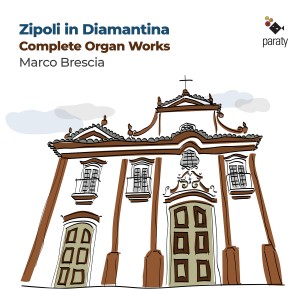 The present album—the first recording made on the historic organ Almeida e Silva of Diamantina (1787), state of Minas Gerais, Brazil—consists of the complete organ works published by Domenico Zipoli (Prato, Italy, 1688 – Córdoba, Argentina, 1726) in his Sonate d’Involatura per Organo e Cimbalo (Rome, 1716), besides some works attributed to the composer from the manuscript Sones mo organo (1746), a miscellany of keyboard works from the Jesuit mission of San Rafael de Velasco, Bolivia. The Chiquitos’ works selected for the present recording were very likely disseminated by priest Martin Schmid. Even if not effectively composed by Zipoli, they do reveal a clear stylistic influence of the composer who passed away in the Córdoba missions, where Schmid was in 1729 before leading to the Chiquitanía. The repertoire presented in this album follows a historically informed approach seeking a commitment between the performance traditions from Italy and Spain of the first half of the 18th century, using for this purpose an 18th century sound source of autochthone Brazilian construction, of which the aesthetical characteristics led to a conscious performance of a Zipoli with a pronounced Ibero-American accent.