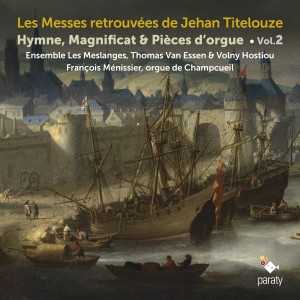 Beautiful tunes coming from these places,
Filled with a tenderness divine,
Bear our soul heavenwards
From whence you originate,
What strange effects
Your melodious chords produce!
My senses live within my body
And think they are with the Angels.
Printed at the beginning of Jehan Titelouze’s Hymnes de l’église pour toucher sur l’orgue (1623), these verses by the poet Pierre Bardin (1595-1635) of Rouen celebrate one of the greatest musicians of the reign of Louis XIII. We knew that Titelouze, long considered the founder of the French organ school of the organ, had also left behind vocal music, which was presumed lost. The recent discovery, by Laurent Guillo, of four polyphonic masses composed by Titelouze was a special event, which today allows us to appreciate his contrapuntal genius in all of its diversity. As the only 17th century polyphonic masses from Rouen that have survived, they constitute a precious link in the knowledge of the musical life of the rich Norman capital and its Notre-Dame cathedral, whose organ was played by Titelouze for nearly a half century, from 1588 to 1633.
The children’s choir of the Rouen cathedral at the start of the 17th century
During the religious battles that bloodied France in the second half of the 16th century, Rouen was an important Catholic stronghold, remaining loyal to the League, which fiercely opposed the Protestants and the reconciliation efforts of Henry III and then Henry IV. In this troubled context, the cardinal Charles I of Bourbon, archbishop of Rouen between 1550 and 1590 and a great league prince, favoured the chapter and the children’s choir of the cathedral. In 1578, he wanted to increase the number of children in the choir from 8 to 12. It was only expanded to 10 in 1587, before rapidly returning to 8, which was reduced at least temporarily to 6 in 1592 on account of the siege of the city by royal troops. Appointed in 1590, the new archbishop, Charles II of Bourbon, who had dared to recognize Henry IV, a converted Protestant, as the legitimate ruler, was not recognized by the chapter until after the lifting of the siege, in May 1592. The return to calm brought prosperity back to the city and the cathedral’s chapter, which was confirmed under the episcopates of Charles III of Bourbon (1594-1604), a half-brother of Henry IV to whom he always remained faithful, of François of Joyeuse (1605-1615), also loyal to the king, and then of the erudite François II of Harlay (1615-1651). The chapter and the children’s choir rediscovered their lustre and their reputation, including in their ranks knowledgeable canons, authors of theological works, of erudition or Norman history, and enlisting valuable musicians, several of whom ended their careers at the Notre- Dame of Paris (Henry Frémart) or at the Chapelle Royale (Nicolas Morel, Eustache Picot). The lists of musical works purchased by the chapter during the first half of the 17th century show that the works of the great French or European masters of the end of the Renaissance (Guerrero, Lassus, Du Caurroy, Le Jeune) were sung in Rouen, as well as the rich contemporary repertoire of the great masters of the kingdom published in Paris by Ballard, “The king’s printer for music”. Rouen became once again the most important organ centre in the kingdom. The wealth of the cathedral and the parishes made possible the construction of magnificent instruments, by the best organ builders of Normandy or of the north of France, attracting renowned organists, of which the most famous was undoubtedly Jehan Titelouze. 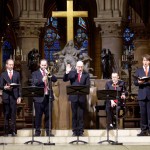