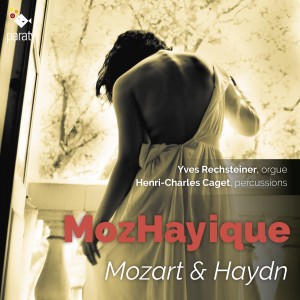 Memories of a recording

Recording an album is an exercise in itself, totally different from a concert, in which the musicians are galvanised by the audience’s presence. It is important to create comfortable surroundings in order to make music for a virtual audience, which will listen to us later, in rush hour traffic, or under the covers, with headphones on their ears.

We chose Bern Cathedral as much for its German Kuhn organ as for the particular atmosphere of its loft: one feels rather at home there, as in one’s sitting rom. However, the lavish sound of the organ reminds us that we are in a cathedral.

In order to start a recording, one must first place the microphones; this determines where our virtual audience’s “ears” are. In order to take advantage of the textures of the percussion and the organ, we deployed a forest of microphones which are close to the pipes and capture all the acoustic breadth of this impressive instrument. Thus we were able to play Mozart as if we were making chamber music, in which every detail counts. The organ, a small miracle of entirely Swiss mechanical and acoustic precision, was effortless to master, and became the zealous servant of our musical urges, from the gentlest caress to the wildest shouts. Even the Vox Humana pipes (a register which imitates the human voice) were willingly tuned to match the keys of the apartment belonging to Elie, who kindly hosted us during our stay.

Every day, the great 32-foot wooden C# (the organ’s lowest-pitched pipe, 10 metres high) welcomed us from above the staircase leading to the loft. Its placid, benevolent gaze, hidden behind its century-old screws, gave us the confidence to face the small musical difficulties that awaited us.

And so, over two evenings, we made a little night music, thanks to Mozart and Haydn, under a Gothic nave, in the shadow of an 18th century wooden and gold facade, surrounded by state-of-the-art equipment, sensitive to the faintest sound. A moment outside of time, alone with ourselves, and yet connected to everyone who will one day listen to us.

Sometimes when the castanets were unleashed in the middle of a sonata for piano, we asked Wolfgang Amadeus for forgiveness, imagining that he would have had a good laugh if he had been there.