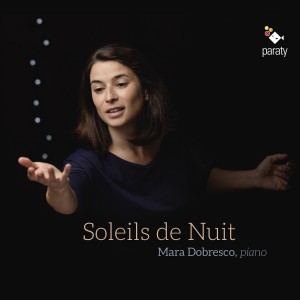 That which we sense without knowing, what we cannot perceive in the darkness, in the reflections or the dancing glimmers, that which can only be said in music, or can only appear in a dream… This is the subject of the album Soleils de Nuit (“Suns of Night”). It is not an album for insomniacs, made to caress and relax. Rather it is an evening stroll, with the particular listening quality a stroll can elicit, in search of extraordinary (or unheard of) lighting… An eyes-wide-open dream.

Alongside the magnificent nocturnes of Chopin, Grieg, Debussy and Tchaikovsky, this disc aims to present lesser-known compositions, such as the nocturnes of Lipatti and Britten, Enesco’s Carillon nocturne, as well as compositions from our time, by Oscar Strasnoy, Philippe Hersant and Anatol Vieru. The choice to include contemporary compositions – and thus share the project with the composers of today – was important to me. I had the opportunity to collaborate with Oscar Strasnoy, who dedicated the cycle Piano4 to me. The Berceuse on this disc is drawn from the cycle, and I have developed a deep affection for the work. My affinity with the music of Philippe Hersant was immediate. His music speaks to me; when playing it I feel “at home”.

I am especially happy to include the Nocturne in F-sharp minor by Dinu Lipatti, my mentor from the beginning, a great pianist whose compositions are unknown to the general public. This Nocturne, written in 1939, is dedicated to Clara Haskil, who appreciated it enormously and performed it on numerous occasions. This piece had to feature in a program which is a search for light in darkness. I always remember the words he regularly repeated to his students: “Always search for the light higher in other people, and as deeply as possible within yourself.”

I chose to end this dreamy evening stroll with a prodigious composition: a posthumous piece by G. Enesco, drawn from the Pièces impromptues. In it, one hears the bells of northern Romania’s monasteries. The atmosphere is palpable, solemn, pensive, impulsive, and at the very end of the piece, I imagine a farewell gesture, formed by a hand at the edge of the world.

Games of shadow and light

I have always been fascinated by light – and also by its absence. As a child, I remember that I loved to close my eyes and sense the warm or cold light through my closed eyelids. This game could last minutes at a time.

Under Ceausescu, I used to practice the piano by candlelight, because we were subjected to frequent unexpected power cuts which, for children such as myself, became enchanted moments.

During adolescence, I used to walk in the streets after dark and, with my head turned upwards, look at the lights of the apartments, the houses, which communicated different things to me – intimate, funny, occasionally disturbing things – through the large eyes of their windows.

Seen from afar, the lights of the tower blocks and the public housing could look like stars falling from heaven.

Later, in Paris, I was fascinated by the night, the moment when everyday life is put on hold, when it disappears. The silence, the solitude, the expectation, the music which plays in one’s mind, the haunting thoughts, the fears, the doubts which arise, the dreams within dreams… and then the birdsong, especially at three in the morning.

This album’s program needed time to find its definitive form and to crystallise. The choice of nocturnes was made progressively and intuitively. It delves into my childhood memories, but I was also guided by close attention to the progression from one piece to another, from one lighting to another. The pieces respond to each other thanks to the sequences of tonality…. Many, for example, are in C-sharp minor. A dark touch – is it the colour of the night?

These Sounds of Night are the constellation in which I move about and where I would like to take all of those who love to dream… in broad daylight.