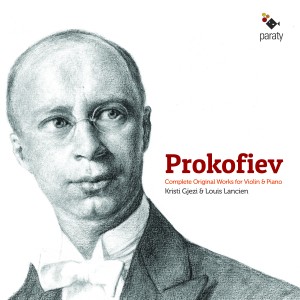 Where do the sonatas for violin and piano fit into the chronology of Prokofiev’s catalogue?

The two sonatas date to the final part of Prokofiev’s career, its Soviet period. In 1918, he left his country of birth for the United States, and then for Europe, before returning definitively to the Soviet Union at the end of 1932. The first sonata, the Sonata in F Minor op. 80, was drafted in the United States in 1938 and completed in 1946, while Prokofiev had completed the second sonata op. 94 in Moscow three years earlier, in 1943, in its original version intended for the flute.

To top off our work on this great composer, revolutionary for some, neo-classical for others, harassed by the totalitarian censorship of the Stalin regime and Andrei Zhdanov who curtailed artistic freedom, we would say that Prokofiev was twice a victim of Stalin. He died on 5 March 1953, the same day as the “little father of the peoples”, and almost at the same time. It is for this reason that his passing went virtually unnoticed and that his funeral was held with an almost universal indifference. To conclude, what attracts us to Prokofiev is his taste for melody, the typically Russian melodic freshness that he found in folklore, because it seems to us that Prokofiev was first and foremost a melodist.

The famous Russian composer, Serge Prokofiev, is here on the menu, with three chamber works for violin and piano. The musicologist, Pierre-Emile Barabier, recently deceased, underlines with pertinence that: “Starting from 1933, and up to his definitive return to the USSR in 1938, Prokofiev progressively became a musician who was basically classical in form, profoundly imaginative harmonically, capable of motorically implacable explosiveness as well as an ineffable and “innocent” lyricism which were the glory of his “Soviet” ballets, Romeo and Juliette, and Cinderella. His youthful causticity and iconoclastic verve made way for an epic inspiration which make these “war” scores invaluable. In chamber music, he was only looking for difficult “challenges,” instrumental experiments, all the while attaining masterpiece status for his Sonata Nº1 for Violin and Piano Op.80.” And it is this work we hear on this disc, along with the Sonata Nº2 for Violin and Piano Op.94a, as well as the 5 Melodies Op.35 bis. Violinist Kristi Gjezi and pianist Louis Lancien share the same sense of musical discourse and their engagement is not the smallest plus of this remarkable CD. Colors, nuances, dynamics, and phrasing are masterfully and abundantly intoxicating. In short, this is a great discographic surprise by two artists whose careers need to be followed.