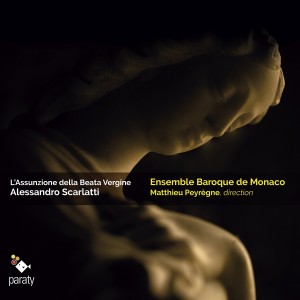 This record is the consecration of years of work. Rediscovering a wonderful, unique score, the impression of having allowed the resurrection of a gem of Italian Baroque. I hope that by listening to this spellbinding music, you will find that these efforts were worthwhile. The Ensemble Baroque de Monaco is proud to dedicate this work to the memory of Prince Antoine 1st who was an ardent lover of baroque music at the end of the 17th century. He was a close friend of Louis the XIVth, with whom he shared the same love for baroque art. How many musicians performed in the Principality, traveling between France and Italy, playing the most beautiful pieces of composers most seen… And why not Alessandro Scarlatti, whose creation of the oratorio L’Assunzione della Beata Vergine dates back to the early eighteenth century, during the enthronment of Prince Antoine 1st to the succession of his father Louis 1st Grimaldi? I thank Her Royal Highness the Princess of Hanover, the Department of Cultural Affairs of Monaco through the intercession of SOGEDA and its director Jean-Charles Curau who made this project possible, as private sponsors who also contributed. Without forgetting all the artists who have devoted themselves so much to this intense work! A big thanks also to the technical team and the record label, for taking part in this realization, having believed in my work, my enthusiasm and my dream to hear one day these notes mute so far, now immortalized by this recording. A special thank to the excellent violinist from Nice Flavio Losco who gave me a hand in the musical work of this masterpiece. Let yourself go to the spells of this timeless music. Good listening to all !