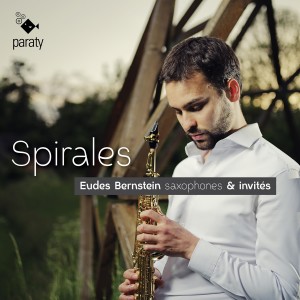 It starts with a fascination for sound, an obsession even, that throws you into the spiral of its various parameters: vibration, waves, speed, intensity, timbre, frequency, height… “I have always been moved by the primordial importance given to sound, and to that in which it evolves: Time” says the performer in this recording. Whether it is fleeting, the time of a dance of death, twisting into a waltz or turning a few loops, from the wrenching expressivity of the soprano saxophone to the astonishing spectre of the elusive bass saxophone, by way of the tenderness of the tenor or the alto, this program tends toward perpetual motion and permanent instability. The organic movement of each of the scores tends toward the – subtle – movement of the history of music itself and its modernity. It was with a dream of new sonorities that Berlioz characterized each of « idées fixes » in his Symphonie Fantastique. It was on a strange ground of immobility, of precocious minimalism, that Ravel introduced the saxophone into his Bolero.
Questioning modernity is all about fragility. When sound ventures to the precipices and to the borders with Anton Webern, and when music creates silence, language opens a new page in 1930, finding an echo – be it only through erosions – in Gérard Grisey and Ondřej Adámek.
These ambitious and poisonous spirals are bewitching, because the very immateriality of sound deceives us, fools us, tells us lies. In the work by Adámek we are lost in a set of doubles, as in Philippe Leroux’s score also where the saxophone and voice are as one. Auditory hallucination or perfection of musical composition:
“I have realized that instruments, fundamentally, are more and more indifferent to me” confided Webern
in a letter to his friend Berg. Indifferent yet different since “any sounding body that is used by a composer is a musical instrument” (Berlioz). Auditory hallucinations, again, with the arrangements of Saint-Säens’
Danse Macabre where the instrument suddenly takes on a darker colour. Hallucinations, still, when the
full orchestra of the Bal from the Symphonie Fantastique or of Ravel’s Valse is made to fit into just three instruments. But this is only to seduce and distract since this waltz, an endless spiral, a “fantastic and fatal whirling” according to the composer, recalls the disasters of the First World War.
Whether attentive, in search of fusion or simply eloquent, the saxophone deploys its endless spirals to plumb the depths and to lift us up. Stairways of time, from the beginning to the present, without ever leaving the listener behind on the journey, with this first opus Eudes Bernstein offers a recording to be listened to over and over again.

“A host of performers shine around Eric Pénicaud, in this beautiful autum-colored record.” 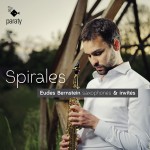